Theaters are ready to reopen, but is America ready to go back to the movies?

Last week, AMC marked its earnings report with a somber note. The movie theater giant warned of losses reaching up to $2.4 billion, courtesy of COVID-19-related closures, adding that “substantial doubt exists about our ability to continue as... 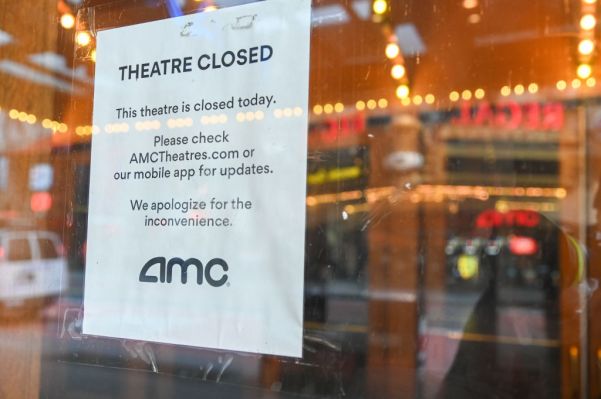 Last week, AMC marked its earnings report with a somber note. The movie theater giant warned of losses reaching up to $2.4 billion, courtesy of COVID-19-related closures, adding that “substantial doubt exists about our ability to continue as a going concern for a reasonable period of time.”

AMC isn’t alone. The pandemic has had a devastating impact on theaters that rely on in-person foot traffic for the vast majority of their income. And as they’ve waited to reopen, some theaters have marked the time with mournful marquees and virtual screenings.

Now, as America begins the slow, deliberate process of reopening, movie theaters have outlined their own plans to return to normal. But it seems clear that like so many other industries, the theatrical movie business remains very uncertain.

The process will come in stages and take into account guidance from bodies like the CDC and state and local officials, as the indoor, close-quartered setups are particularly susceptible to potential transmission of the highly contagious novel coronavirus.

It’s clear that theater owners and industry shareholders are eager to start working again, but a much larger and more important question remains: Are Americans ready to return to theaters? After months of hearing about the risks of transmission, coupled with the virus’s harrowing symptoms, the cost-benefit analysis is a difficult one for movie fans who consider the theater experience a simple and essential life pleasure.

Along with the theaters’ own precautions, states will be implementing additional restrictions. In California, Governor Gavin Newsom issued guidelines under which theaters can reopen starting on June 12. Those guidelines include allowing 25% of theater capacity or a maximum of 100 attendees per theater — whichever is lower. Theater owners should:

Reconfigure, close, or otherwise remove seats from use to ensure physical distancing of at least six feet between attendees. This may require seating every other row or blocking off or removing seats in a “checkerboard” style (use each row but make sure no one is directly behind other patrons) so that distances are maintained in all directions. Members of the same household may be seated together but should maintain at least six feet of distance from other households.

Face coverings will be mandatory and theaters are encouraged to use disposable seat covers. Public water fountains will be turned off, doors should be propped open and the flow of traffic needs to be established. It’s not exactly a carefree film-going experience, but precautions should be welcomed.

It’s been nearly three months since AMC closed all of its locations. In July, the country’s largest theater chain plans to reopen “almost all” of its U.S. and U.K. locations, information that marked a rare bit of positive news for the company’s stock, which jumped 14% last Wednesday. AMC CEO Adam Aron said the chain plans to reopen 97-98% of its theaters by the middle of next month, though he added that the company’s plans are “fluid” — a fair assessment, given the ever-changing nature of our knowledge about COVID-19. (For one thing, New York City —  the country’s second-largest movie market — does not yet have a date for reopening theaters.)

Similarly, Cinemark says that it plans to reopen its theaters across the U.S. in four phrases, with the first phase starting on June 19. And the National Association of Theatre Owners — an industry trade organization — put global theater reopening at between 90 and 95%, globally during the same time frame.

The timing isn’t accidental. Christopher Nolan’s upcoming “Tenet” is set for a July 17 release. The Warner Bros. film, with a reported budget of more than $200 million, will serve as something of a trial balloon, to determine whether the benefits outweigh the risks for cautious film fans.

Other studios have begun announcing plans to reenter the market as well, including Sony/TriStar’s Selena Gomez vehicle, “The Broken Hearts Gallery,” which is slated for a July 1 release — an extremely optimistic gamble for the studios. But given Nolan’s blockbuster track record, and his devotion to the theatrical experience, “Tenet” is largely regarded as the true bellwether for the industry, followed by Disney’s delayed release of “Mulan” on July 30.

The pandemic prompted studios to launch theatrical films like Pixar’s “Onward” to VOD and streaming services much more quickly than usual, as well as circumventing theaters entirely for releases like “The Lovebirds” and “Artemis Fowl.” For the most part, studios have treated this as a temporary strategy, but NBCUniversal has been particularly bullish about the VOD success of “Trolls World Tour,” leading to tension with theater owners.

Can a big-budget Hollywood film make a profit if theaters are operating at reduced capacity? Analysts have suggested that it might work, since theaters were rarely at full capacity before the pandemic (particularly on weekdays). And with no other big releases to compete with during their initial weeks of releases, “Tenet” and “Mulan” will be able to run on many more screens than normal.

But that’s assuming moviegoers will come out, while many are wondering whether the pandemic represents the beginning of a new normal for an industry already struggling to cope with shifting consumer desires.

For example, a new study from Performance Research and Full Circle Research Co. points to a population that isn’t exactly rushing to get their butts back into seats. Seventy percent of respondents said they would rather watch a movie at home versus the theater if both options were available now. Compare that to 13% who chose the theater option. Naturally, things will likely shift in one direction over the course of the next month, and year, but such figures are — at least — troubling for theater chains.

How soon would you consider seeing a movie in theaters again?

Similarly, we conducted an extremely non-scientific Twitter poll, asking readings when they would consider seeing a movie in theaters. Of the 2,445 people who have responded to the still ongoing poll as of press time, 41% said they would wait for a COVID-19 vaccine, 23% plan to wait for next year and 20% and 15.3% chose this summer and fall/winter, respectively. It’s not a precise metric by any measure, but it does speak to a public set to approach such activities with an abundance of caution.

The entire industry will be watching the performance of films like “Tenet” closely. If those early trial balloons fail to fly, it will spell more difficult times ahead for Hollywood.

Taimur does an adorable breakdance

Buttler can win games like ABD and Pollard: Steve Smith

Both Bebo and the newborn are fine: Randhir

With the country reeling under a second wave and a spate of cases hitting hosting...

‘Bahirji’: Makers unveil the first look poster of the upcoming...

The multi-faceted art creator and filmmaker Mandakini Kishor Kakade is all set to...

LOS ANGELES: California will release up to 8,000 more prisoners to reduce the spread...

Vaani Kapoor on credibility for her work

It’s been seven years since Vaani Kapoor made her Bollywood debut. Whether it was...

WASHINGTON: As more universities abandon plans to reopen and decide instead to keep...

How four European cities are embracing micromobility to...

The coronavirus pandemic is acting as a catalyst for urban transformation across...

After the long period of uncertainty, the National Testing Agency (NTA) has finally...

NEW DELHI: Rajasthan Staff Selection Board, Jaipur has released a notification for...

Tollywood divas who amped up their sarees with interesting blouses | Times of India...

Welcome back to The TechCrunch Exchange, a weekly startups-and-markets newsletter....